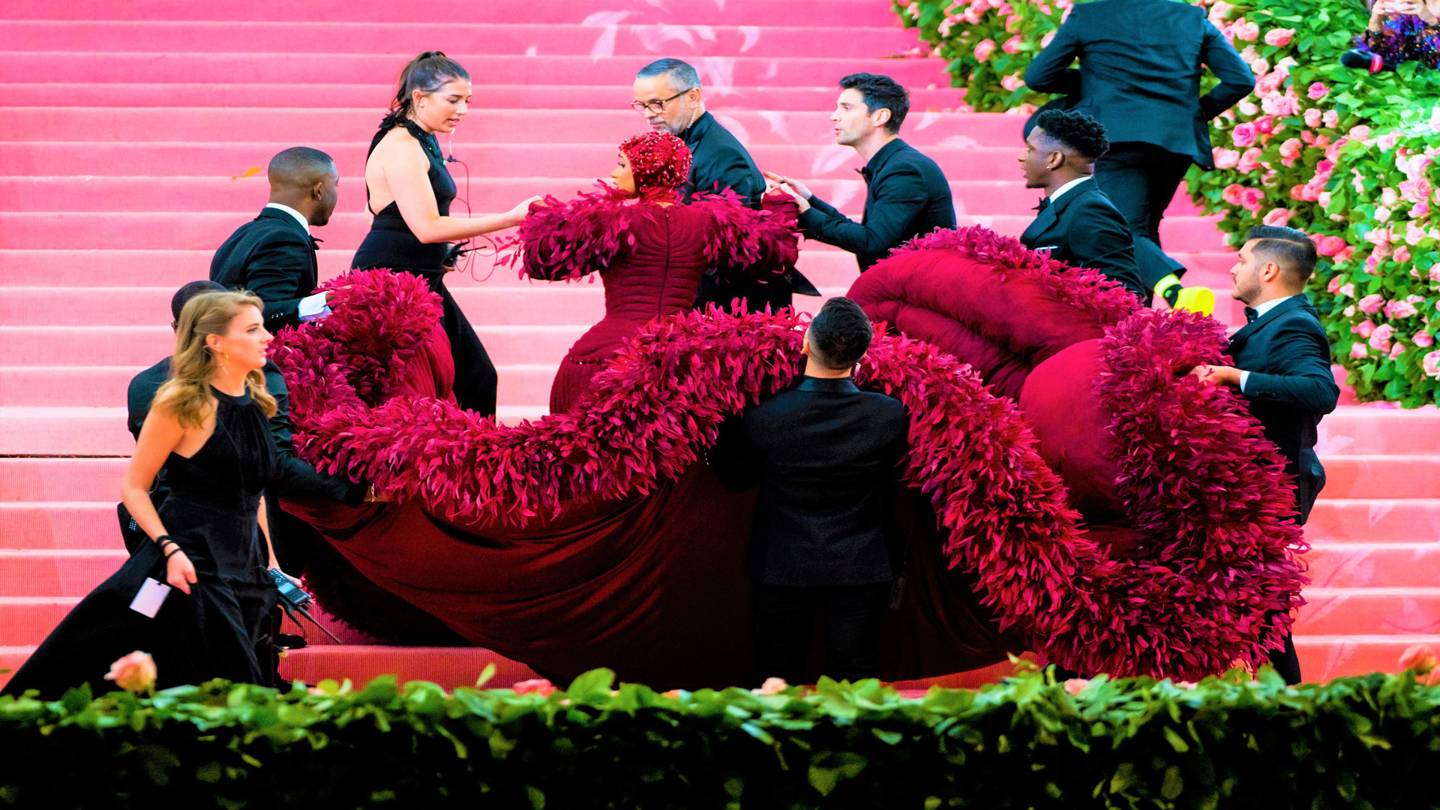 Cardi B needed a team of ten to help carry the train of the dress that Thom Browne designed for her to wear to the Met Gala celebrating the launch of the new exhibition, 'Camp: Notes on Fashion'

Can there still be ‘camp’ in a world where anything goes – from transgender to merged sexual identities – at least in Western society and especially in America?

What is camp anyway, apart from the name of the current exhibition at the Costume Institute of New York’s Metropolitan Museum of Art? Curator Andrew Bolton, who was inspired by Susan Sontag’s 1964 essay, ‘Camp: Notes on Fashion’, claims, “We are experiencing a resurgence of camp – not just in fashion, but in general. Camp tends to come to the fore during moments of social and political instability, when our society is deeply polarised. The 1960s were one such moment, as were the 1980s – and so too are the times in which we are living.” 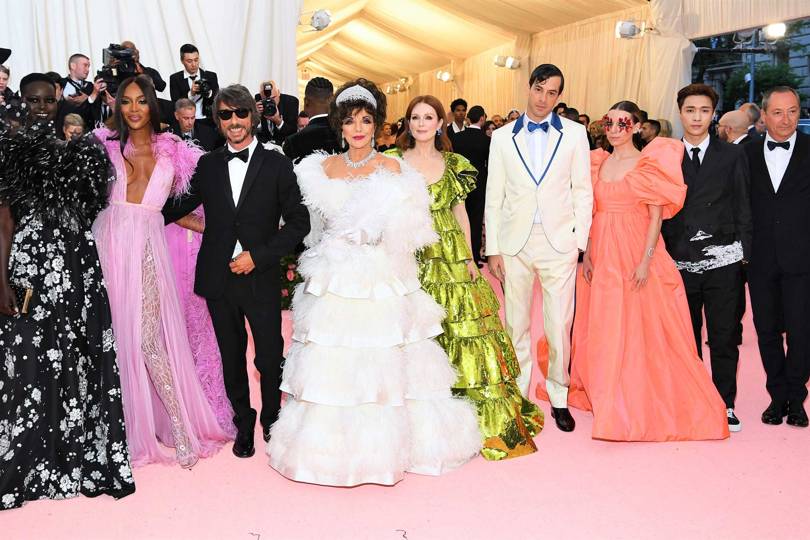 In the broader display space of the exhibition, the clickety-clack of a typewriter tapping out Sontag’s words introduces a splendid display of feathery dresses. Raised to an upper level near the ceiling, they seem like a cluster of exotic birds. 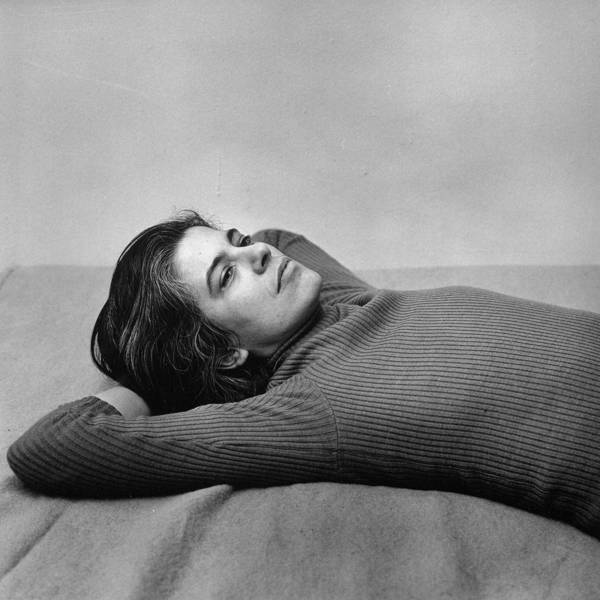 The American writer and political activist might never have imagined that her work would frame the most enormous examples of fluff that I have ever seen mounting the staircase of the Met. For the fund-raising evening Gala, the stairs were pretty in pink and guests entered the museum to a high-rise display of floral flamingos filling the grand entrance hall.

“I think camp is a very individual sense of self expression,” said Anna Wintour, who greeted guests at the top of the stairs, along with Lady Gaga, who, by the time I walked up, had already changed her outfit four times. 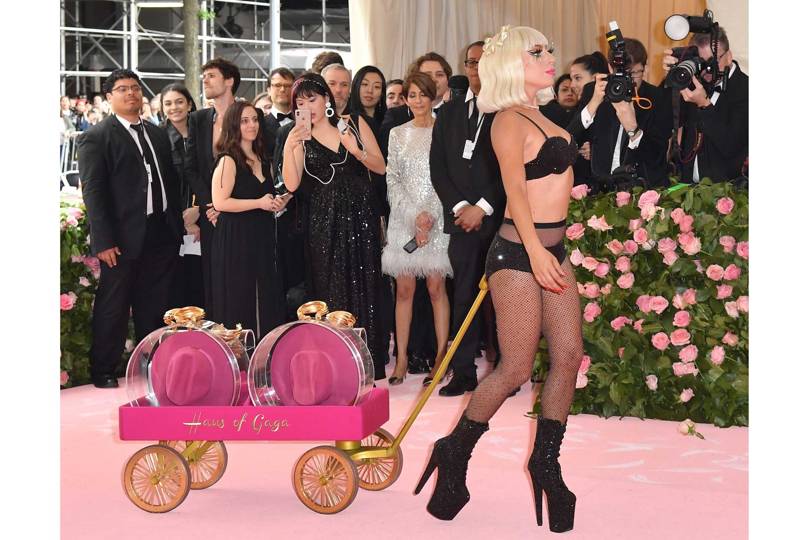 Wearing the final of four outfit changes for the 2019 Met Gala's 'pink carpet', Lady Gaga parades in Brandon Maxwell, trailing a wagon of Stetsons behind her

Yet even the intellectual and hyper-articulate Bolton found it difficult to express just what is – or perhaps was – the essence of camp. 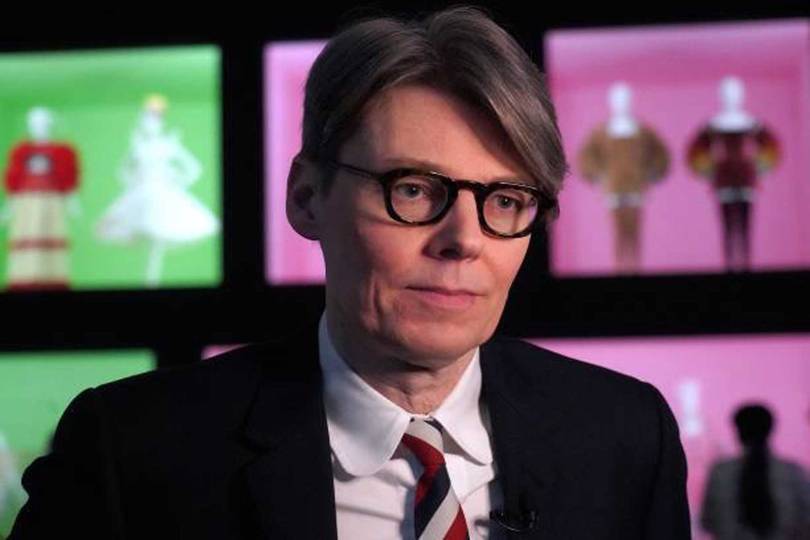 “It’s easier to describe the characteristics more than define it,” the curator said. “You can see it as theatricality and extravagance; I think it’s easier to do that. But I do feel that it’s political. I think people often mistake it for something that is just frivolous or has no meaning, but it has so much meaning. And Punk always comes up and bubbles to the surface when we need it the most.” 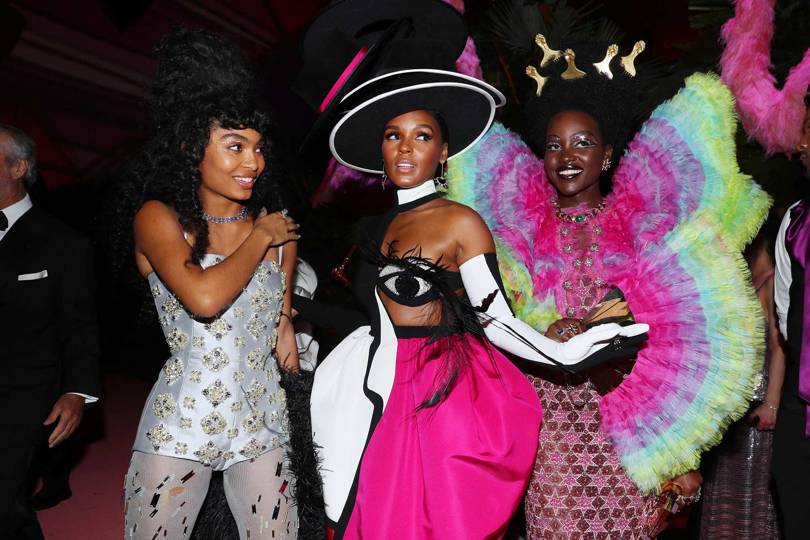 Alessandro Michele, Creative Director of Gucci – who wore a scarlet satin jester’s jacket while his friend Jared Leto carried a model of his own severed head as inspired by a Gucci show – spoke out about his vision of camp as political. 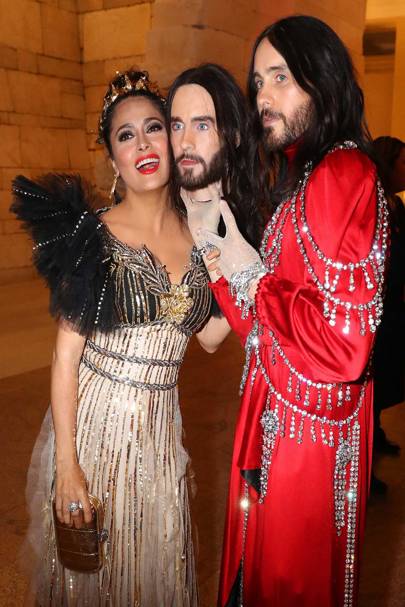 “I was so proud to be part of the project because it’s such a political world,” said Michele, whose Gucci company was a major sponsor of the event.
“It’s not just the way you look,” he continued. “From when I was a little guy, I tried to be free. And the way you look is a piece of your freedom. There is something very political inside. My Granny was always saying, ‘You are such a special kid, but the way you look is sometimes a problem.’ But I think it’s a beautiful problem, in that we can now express who we are and appreciate that in the way we look.” 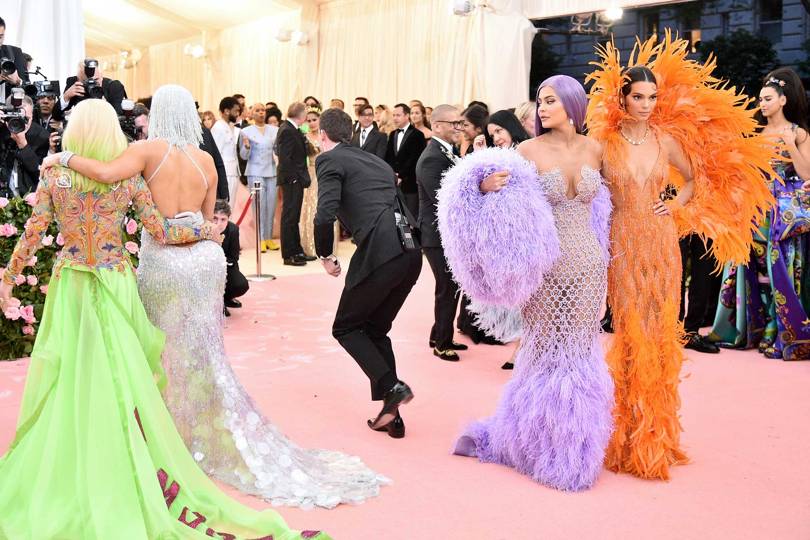 Gay pride seems to dominate the opening area of the exhibition. While at the Gala there were plenty of theatrically dressed party males, flaunting their sexual orientations on the stairway, there were many more women at the opening event who were showing off in the usual breast-and-leg revealing way. ‘Camp: Notes on Fashion’, as Sontag defined it, was “a woman walking around in a dress made of three million feathers”. Both sexes followed her theme, with the aesthete Hamish Bowles, Editor-at-Large for American Vogue, in a multicoloured frou-frou feathered robe by John Galliano for Maison Margiela. 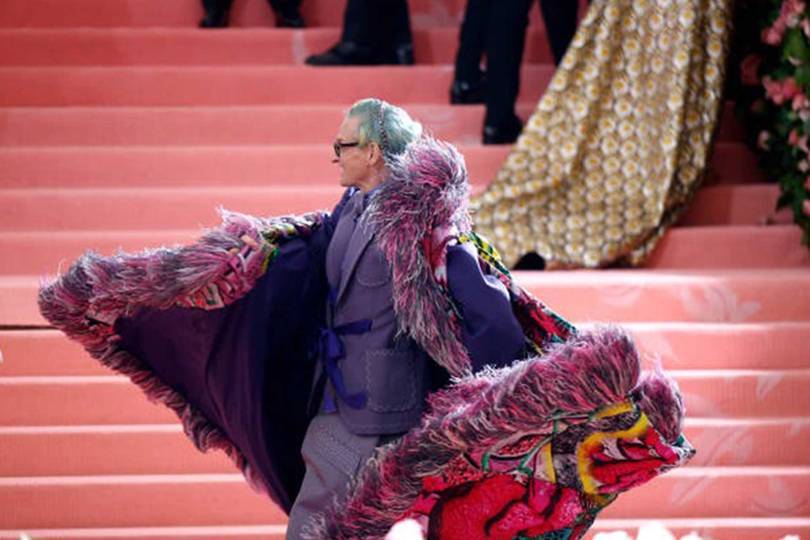 Yet the exhibition starts with a focus on nearly-naked males, as in Vivienne Westwood’s men’s leggings in ‘nude synthetic knit’ from her ‘Britain Must Go Pagan’ collection from Autumn/Winter 1987. Other contributors to the naked male include Robert Mapplethorpe’s 1987 presentation of an ancient marble figure clutching the folds of a curtain. 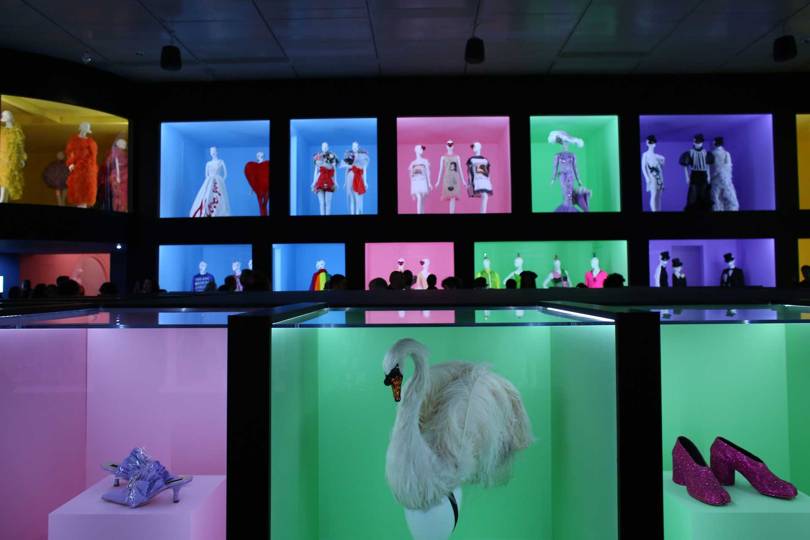 An installation from the new exhibition, 'Camp: Notes on Fashion' at the Metropolitan Museum of Art 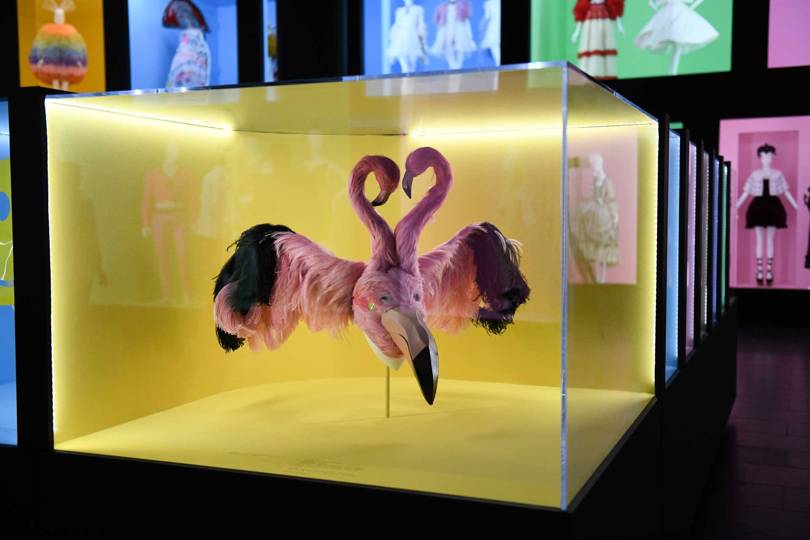 A flamingo headdress by Bertrand Guyon for Schiaparelli, Autumn/Winter 2017 at the 'Camp: Notes on Fashion' exhibition at the Met

Along with evermore nudes (including Hal Fischer’s 1977 photo series, ‘Gay Semiotics’) are other potential versions of camp. Lead player is Louis XIV, with his shapely, shiny stockinged legs and red ribboned dancing shoes that appear from under a flouncy padded coat.

No man on the Met stairway put on such a show. But it was dubious to define as camp this historic figure, among several other fancifully dressed royal princes. However, the curator has dug out the Chevalier d’Éon – a cross-dressing 18th-century nobleman. 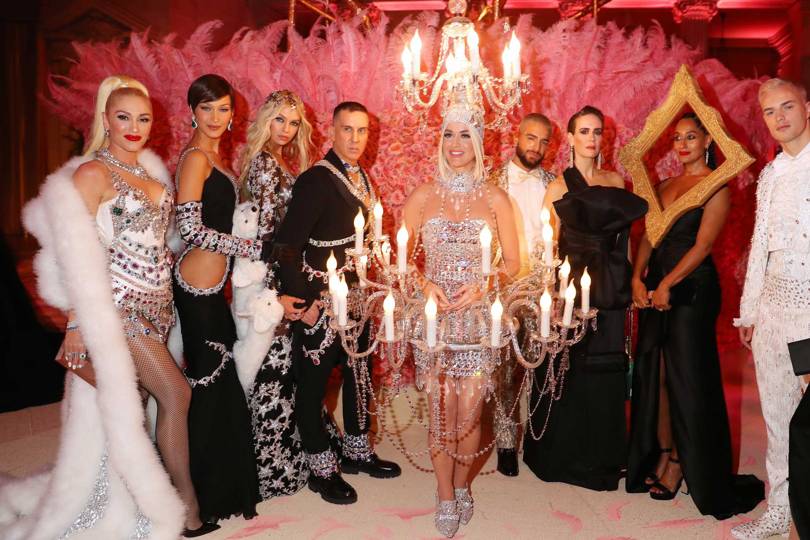 The presentations of obviously gay camp styles dominate the narrow and pokey early corridors of the show. Then, that particular vision ends with a pair of cross-dressers whose ‘drag wardrobe’ was confiscated by the police in 1870. The show then moves beyond “the type of frock coat worn by Oscar Wilde” (and made by Gucci in 2017). 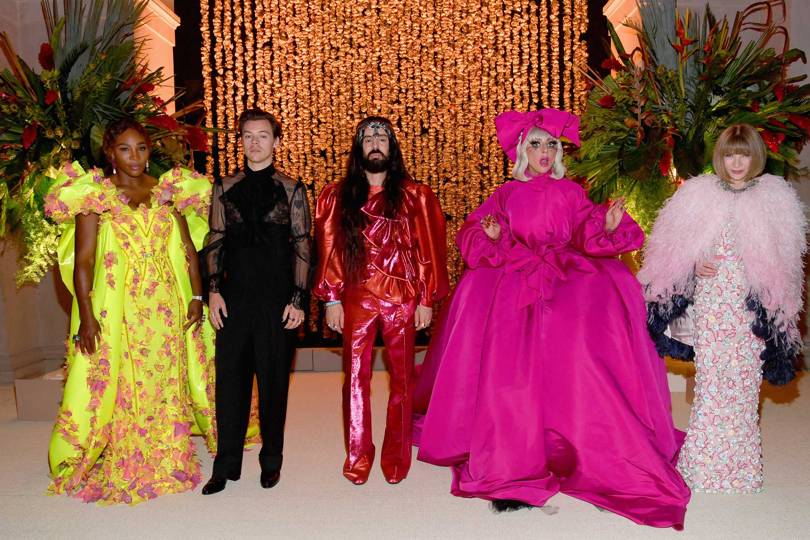 With the installation of Sontag’s typewriter, the exhibition takes a more intriguing turn. She located the origin of camp in the late 17th and early 18th century, “because of that period’s extraordinary feeling for artifice, for surface, for symmetry; its taste for the picturesque and the thrilling”. 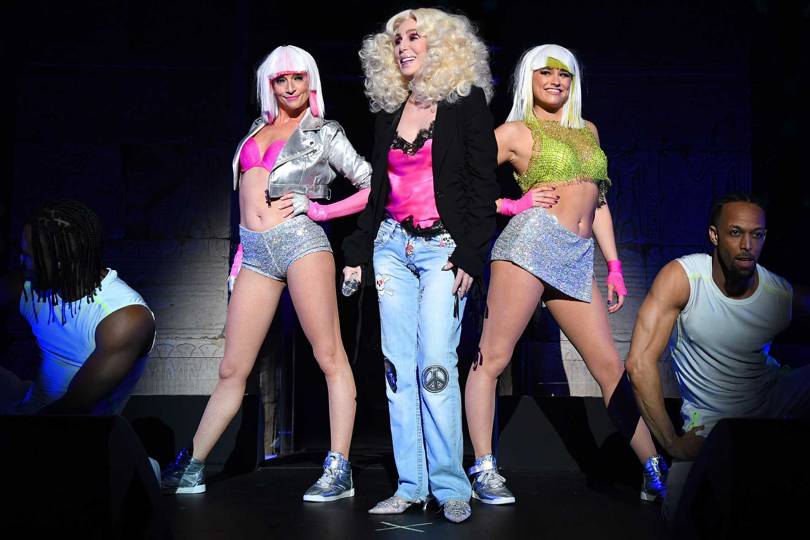 According to Bolton, Sontag framed “an unmistakably modern sensibility that reflected the revolutionary impact of the 1860s and the challenge it brought to the intellectual establishment by popular culture”.

Some of the juxtapositions seem tenuous. Why place a Balenciaga purple dress from 1961 beside a 2018 Jeremy Scott for Moschino dress, smothered with butterflies? But the stage costumes of Liberace, the ultimate camp performer, dazzle among the 175 pieces in the show.

Camp, it seems, is in the eye of the beholder. Let’s hope that the surreal sight of the weird and wonderful outfits worn for the Met Gala will be shown on film as an extra artefact for the exhibition. Top prize to Pose star, Billy Porter, arriving at the pink carpet event with his golden wings stretched above a chaise carried by six glamorous, bare-chested flunkeys.

‘Camp: Notes on Fashion’ is at the Costume Institute of the Metropolitan Museum of Art until 8 September 2019 (www.metmuseum.org) 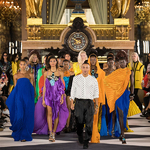 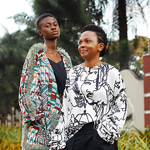 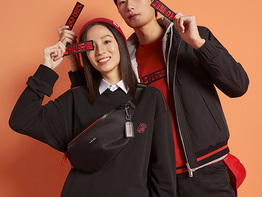 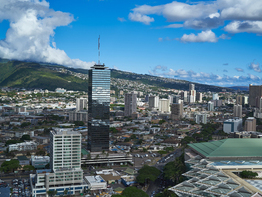